This is a feed aggregator that collects what the contributors to the KDE community are writing on their respective blogs, in different languages

Today we want to introduce the last of the new features we are implementing into the 2.9 release which we have recently finalized.

To demo this new feature, let’s use an example contributed by one of our users. This example is based upon the measurement data from a solar cell. The so-called “incident photon-to-current conversion efficiency” (IPCE) tells us how many incoming photons are converted into free electrons in the cell. This conversion efficiency, together with the generated current and their dependency on the wavelength of the incoming light, are the usual subjects of studies and optimizations for solar cells.

Consider the example where we want to plot the IPCE and the current density in the same plot and to see their behavior as a function of the wavelength. Your first idea may be to just lay out the curves for the plot like this: But this reveals two problems:

We can remedy the situation a bit by using a plot legend which helps discriminate the different curves. Unfortunately the result is still far from being optimal, and this way of plotting different quantities having different units is commonly considered wrong.

A better solution for this kind of visualization is to work with two different data regions and axes. This is something that was not possible in LabPlot before now and it is a feature for which we had multiple requests in the past. This has led us to  recently implement this missing functionality, and the plot below shows what it looks like: Note how, by working with two different axis scales and colors, you can produce a much clearer and more coherent visualization. Such a result is easily achieved in LabPlot now, and it all starts with the definition of the two data ranges for the x and y directions: The red-highlighted area in the image above is the new feature. The ranges for x and for y are combined into “Plot Ranges” and the objects on the plot like axes and curves are “assigned” to the different plot ranges. Once the definition of the plot ranges is done, the desired visualization for the two curves in the plot above is achieved with one single step by selecting the proper data range for every curve: We arrive at the final result by assigning the second y-axis to the second data range and by adjusting the color properties of the second axis.

The user has a lot of flexibility in LabPlot to position the axes. Another possible visualization utilizing the two-axes technique is shown below: A detailed walk-through for this example is maybe an idea for a future tutorial.

Suffice to say that, as mentioned, the development of new features for 2.9 is finalized, and we are now concentrating on the stabilization and quality control work to prepare everything for the release. People interested in contributing to these activities are invited to test our nightly builds and to provide us with feedback.

clau-cambra 08:00 +00:00
RSS
Today (Wednesday 27th Oct) at 18:00 CEST I will be streaming some Kalendar development live on YouTube and on KDE’s Peertube instance. KDE Peertube (Kockatoo): https://tube.kockatoo.org/c/clau_cambra/videos My YouTube channel: https://www.youtube.com/watch?v=etAlv78LaIE If you are curious about contributing to Kalendar, have questions for me, or just want to hang out, come say hi! 😁

on the Firefox Add-ons page.

A fix is being worked on, but might take a bit, sorry about that.

Update [2021-10-25]: Due to issues with setting up the now-mandatory 2FA for logging into the Add-on page, we cannot address the issue at this time. Stay tuned…

Niccolò Venerandi Video 10:04 +00:00
Atom
Links should go here but it's like midnight, I'm super tired, I keep finishing these videos super late... I'll try to add them tomorrow morning as soon as I have 5 free minutes :( Stay in the loop: https://t.me/veggeroblog If you want to help me make these videos: Patreon: https://www.patreon.com/niccolove Youtube: https://www.youtube.com/channel/UCONH73CdRXUjlh3-DdLGCPw/join Paypal: https://paypal.me/niccolove My website is https://niccolo.venerandi.com and if you want to contact me, my telegram handle is [at] veggero.

Another step in the further expansion of the KDE Connect ecosystem

TL;DR: Get the public testing version of KDE Connect iOS by opening this TestFlight link on an iOS >= 15 device!

Check out the source repository of KDE Connect iOS.

Some screenshots of KDE Connect iOS:

After being picked up again earlier this year, the KDE Connect iOS project is now moving towards public beta testing with TestFlight to collect more user feedback and problem reports as the project inches further towards a full release sometime in the (near?) future.

Here are some key points from the README.md from the KDE Connect iOS repo:

Please feel free to give feedback/report bugs in the TestFlight version through:

- TestFlight's integrated screenshot feedback system: upon taking a screenshot of the app, tap "export" to see an option to send it as feedback to the developer (us).

- If you don't send ANY feedback AND have "Share with App Developers" disabled, the ONLY information that the KDE developers can access about you is the date that you've installed the TestFlight app.

- Enabling "Share with App Developers" discloses general information such as the number of app launches and crashes with the KDE Connect devs.

- Sending feedback through KDE Bugzilla lets you manually disclose as much or as little information as you would like, but all information will have to be investigated manually.

- iOS is very much designed around foreground interactions. Therefore, background “daemon-style” applications don’t really exist under conventional means, so the behaviour where KDE Connect iOS is unresponsive in the background is more or less intended. There are technically some special categories and "hacky" methods to try to get it to run in the background, but in general, there is no intended/by-design method of keeping a "daemon-style" app running forever in the background. For more information, see this post on the Apple Dev Forums.

- Detailed information on what's not working and what changes took place between different versions and builds of KDE Connect iOS can be viewed in the TestFlight app in the "What to Test" section.

Lastly, please feel free to have a chat with the KDE Connect devs at the places below!

Do you smell what's cooking? A new white paper is out with in-depth insights on the latest UIUX trends on hardware and software architectures to help pivot through smarter production for your product lines.

Plasma 5.23 was released in October 2021 with many feature refinements and new modules to complete the desktop experience.

This release adds a week's worth of new translations and fixes from KDE's contributors. The bugfixes are typically small but important and include:

Cornelius Schumacher 19:16 +00:00
Atom
What makes a great team? One important factor is that you have a balanced set of skills and personalities in the team. A team which only consists of leaders won't get much work done. A team which only consists of workers will not work into the right direction. So how can you identify the right balance and combination of people?
One answer is the Team Member Profile Test. It's a set of questions which team members answer. They are evaluated to give a result indicating which type of team member the person is and where it lies in the spectrum of possible types.
There are two dimension which are considered there, how much team members are oriented towards tasks and how much they are oriented towards people. This can be visualized in a Results Chart.
Here is an example: 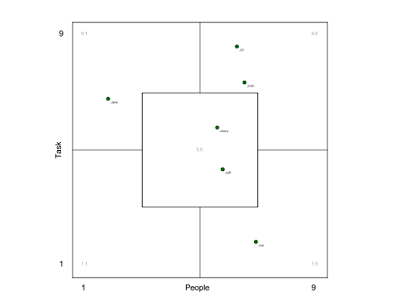 You can see five segments:

The test can provide some insight into the balance of the team. You want to have all but the submarine covered with an emphasis on the workers.

How does your team look like on this diagram?

With Latte 0.10.3 indicators gained the ability to specify the background corner margin. This is totally on indicator responsibility to expose or adjust properly and that is the case for Latte and Plasma Indicators that expose it from their settings. With this setting the user is now able to move tasks and applets inside the corner of backgrounds with very big roundness.
It was decided that the option should be part of the indicators api because it is on indicators responsibility to specify how much of the area provided to them, it is actually painted. If an indicator is not touching corner margin at all then default latte behavior is used which is playing safe by taking as granted that indicator is painting the entire area provided to it all the time.
Donations

You can find Latte at Liberapay,

brsvh 08:03 +00:00
RSS
Since I started discussing with Aniqa about organizing some events in China to promote KDE in China in April this year, after half a year of hard work and attempts, I helped KDE Network China and Ubuntu Kylin first event to be successfully held on October 23rd at Central South University. The name of this event is Linux Application Ecosystem Salon, 2021 Changsha marked it as one event in Changsha in 2021.