John Evans contributed a new Focus algorithm: The Linear 1 Pass Algorithm. When using this algorithm, Ekos initially performs like the Linear algorithm in establishing the first pass V-Curve and fitting a curve to it to find the solution. Then, however, it moves directly to the calculated minimum. Key features include: 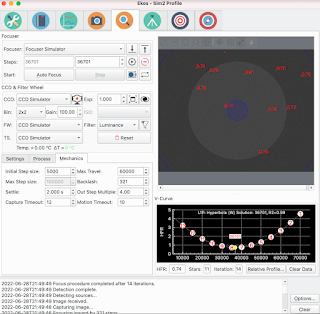 Hy Murveit introduced a new Polar Alignment method based of plate solving. The original polar-alignment error measurement scheme has not changed. The user interface has changed slightly--different messages and a new LED display to indicate progress.
The original polar-alignment refresh/correction method still exists (if you choose the MoveStar or MoveStar & Cal Err refresh methods).
A new polar-alignment refresh/correction method is provided called PlateSolve. It allows for corrections of larger polar-misalignment in a single pass, does not depend on the image display, and may be more reliable if your plate solving is working well.
A new alternative to MoveStar is the PlateSolve method. This can polar align mounts with larger alignment errors in a single procedure. A similar triangle is displayed on the image display, but it is not central to this scheme. 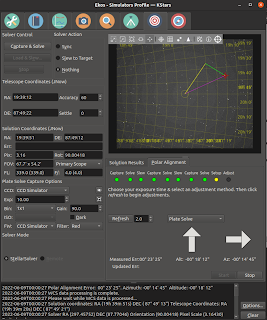 Rather the user should concentrate on the Updated Error line at the bottom of the display, and attempt to zero the Altitude and Azimuth errors. Also, arrows display the direction the mount needs to move to reduce error.
The method works by plate-solving images as they are captured, and then estimating the user's knob-adjustments from the plate-solve solutions. Note that, since knobs may be moved during exposures, some images may have large star trails and plate solves may fail. Be patient and allow the system to capture a clean image before relying on the error estimate.

Madhav Prabhu made his first contribution to KStars by adding Region-Of-Interest (ROI) selection in FITS viewer where users may view statistics for a particular region of the image. The stats include average, median, and standard deviation. 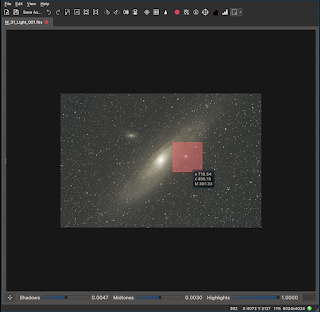 You can select from existing probes of varying sizes (50x50, 100x100..etc), or you can simply hold down the Shift key and drag the mouse to create your own rectangle.

You may define a Pre-Delay and Pre-Script before a driver is executed (e.g. script to turn on the observatory electricity), and define a Post driver delay and script if desired. For some drivers like Pegasus Ultimate Power Box, it is often desirable to start this driver before other drivers so that all configuration is loaded.

Ed Lee made his first contribution to KStars by replacing the old geographic map from a new high quality version from NASA. This should play more nicely on larger monitors and high DPI displays.

Small but important quality of life improvements to KStars & Ekos.