The Language Server Protocol (LSP) allows the integration of stuff like code completion, jump to definition, symbol search and more into an application without manual re-implementation for each language one wants to support. LSP doesn’t fully allow an integration like KDevelop or Qt Creator do with the libclang based tooling aimed for C/C++ but on the other side offers the possibility to interface with plenty of languages without a large effort on the client side.

If one takes a look at some current LSP clients list, a lot of editors and IDEs have joined the LSP family in the last years.

In the past I was always scared away to start implementing this in Kate, as no readily available library was around to do the low-level work for the client. Whereas you get some reference stuff for the JSON based protocol for JavaScript and such, for Qt nothing was around.

Fortunately Qt Creator started to implement an LSP client beginning with the 4.8 release.

Based on this code, I started now to get this into the Kate project plugin. At the moment not much more has happened then some initial import of the Qt Creator LSP infrastructure code into the Kate lsp branch.

If I get this working (help is welcome!), any improvements will be submitted back to the Qt Creator implementation. If it really starts to work well in Kate, one might think about some better code sharing in the long term. But before such plans, first at least some basic things must work for some initial language server like clangd.

Usually, in my workshop I am listening to the great radio station Bayern 2 (Yeah for public law media). But sometimes you just need to listen to nice classic english punk music, speed folk or (the one and only) Lemmy and friends.

For that I was looking for a so called boom box to stream to from my mobile, simple, dirty and loud. Good that I was a proud awardee at the HiFiBerry Maker Contest 2017 with my TeakEar build, where I won a nice set of a RaspberryPi Zero with a little HiFiBerry MiniAmp, coming with all what is needed to make that working.

That should be enough to get proper punk sound in the workshop – and escape the
boring normal commercial boom boxes all around.

At a flee market I found a great case for that – exactly one of these that were in the classrooms of my school giving the unbanning gong at the end of each lesson. Nicely with the original non-color textile hiding the speaker and nicely done bended and veneered wood for the elegance.

A great fit for my usecase.

Two 3.3 inch Visaton fullrange speaker are mounted in simple closed chassis. The Raspi with the Amp is mounted between them. All is mounted on a back plate that fits the school speaker chassis. Boombox ready.

From a software perspective, it is there is just a Raspbian running that is configured to act as a bluetooth audio device for my mobile.

I think it is a nice addition to my workshop, with a great ease of use since it auto-connects to my mobile. Does it sound great? Oh no, not ..really. Is it loud? Well, yes, loud enough to not get in trouble with the neighbors. Given it’s size, it is actually impresse.

The only downsize of the whole thing is that it disturbs the radio reception quite a bit, so it is really either or. Any hints how to reduce that?

We're pleased to announce the newest release of KPhotoAlbum, the photo management software for KDE/Linux.

This release is mostly about optimization and bugfixes. Most notably, we now support compilation with exiv2 0.27. Also, using mplayer for video thumbnail generation has now been removed, leaving the task for ffmpeg. Please also notice that, starting with this release, at least Qt 5.9 is required to build KPhotoAlbum.

Other changes from the ChangeLog:

Thanks to everybody who put work in this release. The git log lists the following individuals (with me being only responsible for the release this time ;-)

Apart from this, we're very happy to now have a new official maintainer!

Jesper "blackie" Pedersen (the original project maintainer and founder of KimDaBa/KPhotoAlbum) announced his retirement from the project a long time ago, back in 2012.

Mostly, Johannes Zierl-Zarl lead the project commissarially since, at least from 2014 on when I joined it (and still, the fact that I even know a bit about C++/Qt coding and that I'm a KDE developer now are mostly caused by him being a forbearing, tireless and competent coach).
Now, quite some time later, he's officially the project leader. And fore sure, he's the one who knows his way around in more than 80,000 lines of KPA code.

So thanks once again to Jesper for founding this nice project and maintaining it for years! And big thanks to Johannes for accepting his inheritance and continuing to care about KPhotoAlbum!

Elisa is a music player developed by the KDE community that strives to be simple and nice to use. We also recognize that we need a flexible product to account for the different workflows and use-cases of our users.

We focus on a very good integration with the Plasma desktop of the KDE community without compromising the support for other platforms (other Linux desktop environments, Windows and Android).

We are creating a reliable product that is a joy to use and respects our users privacy. As such, we will prefer to support online services where users are in control of their data.

In the part 1 of this series, I have talked about the following additions:

Today, I would like to introduce more features that will be in the future 0.4 stable version.

Undo Support when Playlist is Cleared

Elisa is currently a player with a strong focus on the current playlist. It is quite possible to have spent some time to compose a playlist. This is something valuable for the user.

What if suddenly, you hit the wrong button and lose all your work ?

A notification will be shown to undo this operation. This feature has been contributed by Jérôme Guidon. Thanks a lot for its first contribution !

The currently implemented browsing modes are the following:

It is planned to add more modes but that requires a way for the user to configure it to its liking before adding more.

Starting from a very good design work by Diego Gangl, the new context view is now able to show some of the metadata from the currently playing track like the composer, lyricist, play count, lyrics …

The current support for lyrics comes from a suggestion from Nate Graham. It is only supporting lyrics written in the track metadata. Support for online services will come in the next releases.

Elisa is now loading the views fully on demand. It means that no memory or processing power is needed until one clicks on one of them. It also means that they no longer take resources when they are hidden.

One of the consequences is a better startup time and reduced memory usage. Another one is that when loading your music a busy indicator is shown to help understand what happen.

The model that is used to show your music is also now completely generic and should allow a much greater extensibility and customization.

Now is a very good time to get involved as the next version is being stabilized. You can help with code, bug reporting or triaging, documentation …

Thanks a lot to all contributors to this project be a feature, a fix, ideas, reported bugs …

Thanks a lot to the KDE community that is really providing very useful and powerful tools to project like this one.

The easiest way to do that is by using flatpak or Windows installers produced by the KDE continuous build servers. I now that some distributions also have package built on top of Git.

Marble Maps - Find your way and explore the world on Android! 🔗

Gábor Péterffy (pgabor) 20:40 +00:00
Atom
Update 1: Google Play still not has the newest version, but it is incomming in the following days
Update 2: There is an open beta version now, you can get it from here from Google Play.

Marble Maps has the following features: 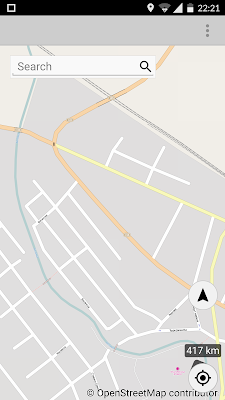 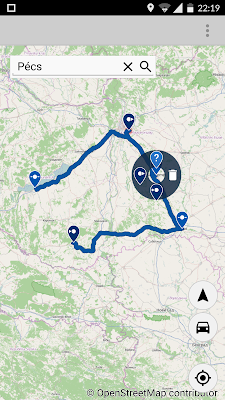 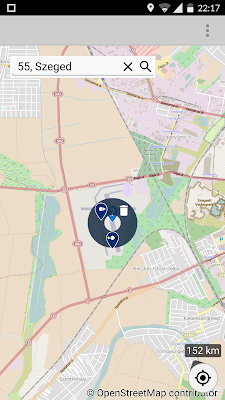 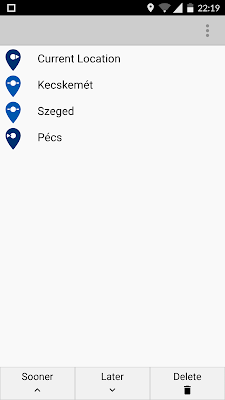 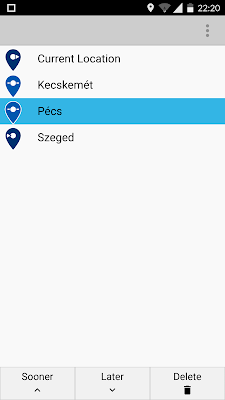 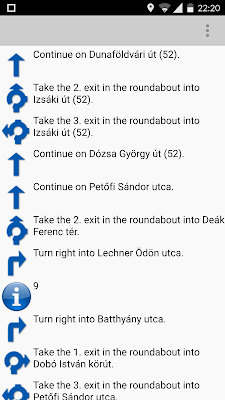 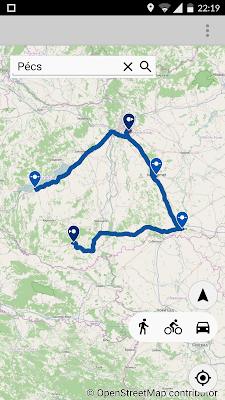 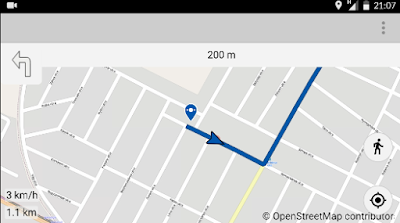 Some techincal background:
Marble's base source code in this summer has become Android compatible. If you want an Android app can be built on the top of it. Any map can be loaded in, and all of the projections are available. It supports some plugins too. 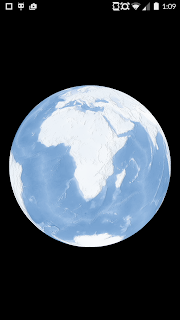 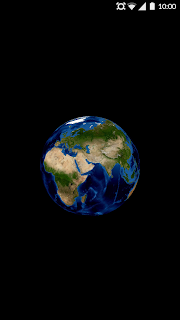 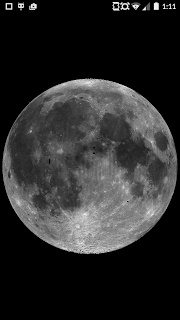 And finally my personal experience about the summer:
I liked to work on this project very much because I have learned a lot of new things, like coding technics, I have got closer to QML and I also have had a deeper insight on how Android applications work. It was also good to work with the people of the community. I would like to thank to everybody who helped me this summer, especially to Dennis Nienhüser and to Torsten Rahn. Without them Marbe on Android would be still a dream.

Thank you Google for this fantastic opportunity!

But the story is not ending here, so stay tuned...